The re-release for The Rise of Aredor series approaches. 🙂

Formatting was an adventure, but it’s done. Proof copies have been ordered, and I’m actually expecting them today or tomorrow. So once I get everything checked out and approved with those, it’s time to finalize a release date! 🙂

I’m tentatively planning for August 29. Ah! I’m getting so excited to get these books back out into the world.

If you’re new around here, my publisher for the Aredor books closed back in January. After a few days of panic and stress, I got everything sorted out and got my files back from the publisher. I decided to go forward with an idea I’d toyed with last year – setting up my own imprint for all my independent publishing activities. Which led to the formation of Campitor Press.

Isn’t it so pretty! 😀 All my indie books will be under this name and logo.

Once I got all that sorted out, it was time to dive back into the world of Aredor. Now having been in the author/writer world for about three years, there were a few changes I wanted to make to the books. There were a few mistakes that got missed in proofing, so those got fixed, and a few other technical issues addressed.

In The Rise of Aredor you will find a few new scenes and dialogue that I think help round out some of the characters a bit more. The Wildcat of Braeton also received some bits of new dialogue. But for those wondering, the overall story, plot, characters, etc, is still the same. No major changes were made.

I had some awesome readers that helped me out with beta reading my changes, and generally being really supportive fans of the books. You guys made all the headache worth it! 🙂

And guys, let me take a moment to shout out to Rachael Ritchey who helped me with formatting and spiffing up the interior design and giving The Rise of Aredor’s cover a bit of a facelift. She’s seriously awesome and has been so patient with me through this whole process. Seriously, if you need any formatting or design, she’s brilliant.

Now with a release date in sight, it’s time to start thinking about possibly doing a launch event. It’s kind of short notice, but with that in mind and me starting my new job next week, it might not actually take place around the release date. All that aside, I’ll be sending out an email looking for bloggers or readers to help celebrate the series relaunch. Comment below if you want to be included in that email! 🙂

I’ll leave you with this (also from Rachael) 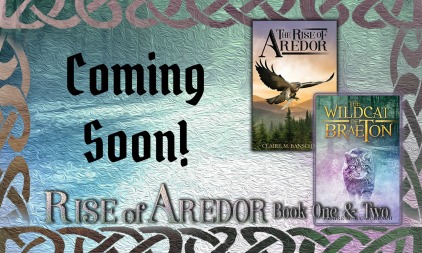