Today I have the privilege of hosting Sarah Holman and her newest book Brothers and Betrayal! It is the second in her Tales of Taelis series. 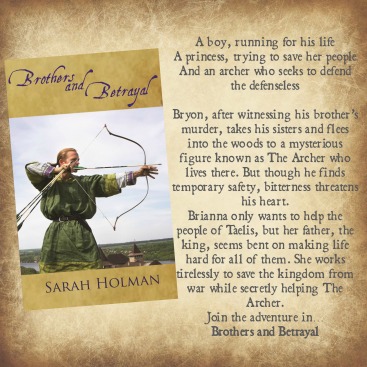 Now I have not had a chance to read the first in the series, but I am very interested in Brothers and Betrayal, so you can bet the series will be read by yours truly hopefully some time soon! Sarah has agreed to do a guest post on the origins of this book. So sit back and enjoy!

Brothers and Betrayal: The Story Behind the Story
I do not remember a time when stories were not a part of my life. Whether it was listening to my parents talk about how they had met, reading books, or making up my own, stories were a huge part of my growing up years. Some of those stories stuck with me for years and slowly grew from silly juvenile stories into mature ideas just waiting their turn to come out on paper. Brothers and Betrayal is one such story.When I was eleven, I was obsessed with Robin Hood and the Middle Ages. I wrote my own version of Robin Hood, set in a fictional country. That story was my first large writing project and while it wasn’t good enough to show others, the story stuck with me. Even as I wrote other books, in the back of my mind that first story that was growing and changing. As it grew, it looked less and less like Robin Hood and more like my own story.

When I came up with the idea for the Tales of Taelis series, I wanted it to be a series with stories targeted for ten to fifteen year olds. I knew instantly that my Robin Hood story would be perfect. It had adventure, good characters, and the potential to show the power of forgiveness and God’s love.

One of the best parts of writing this book is to see how far I have come as a writer. Getting to rewrite my very first book, and seeing how much it had matured was a great encouragement and so much fun. It also inspired me to go back through some of those old story ideas and rewrite them at some point. In fact, the next book in the Tales of Taelis will also be (as I like to say) a remastered version of one of my early works. 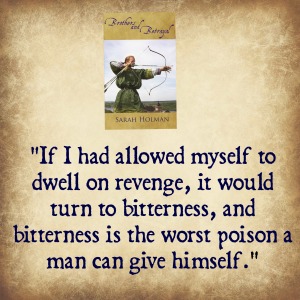 Are you interested in Brothers and Betrayal? You can preorder a copy here.

Sarah Holman is a not so typical mid-twenties girl: A homeschool graduate, sister to six awesome siblings, and author of three published books and counting. If there is anything adventuresome about her life, it is because she serves a God with a destiny bigger than anything she could have imagined.

I’m just going to pop in and say that Sarah really motivates me. Not only does she find time for her own writing but she runs the Homeschool Authors blog and finds time to do interviews and reviews for all of us. I’ve read a few of her works and they are really good! Definitely check them out!
Good luck with everything, Sarah! Can’t wait to read Brothers and Betrayal!

Don’t miss the rest of the blog tour!