Howdy! Today I am very pleased to have Jaye L. Knight as a guest over here. The King’s Scrolls, the second book in her Ilyon Chronicles, was released on the 17th and if you’ve followed this blog for awhile, you’ve most likely heard me rave about these books once or twice. Be prepared for more raving by the end of this post! So here we go! 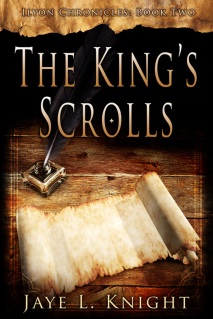 Following the harrowing events that brought them to Landale Forest, Jace and Kyrin have settled comfortably into their new lives and the mission of protecting those under the emperor’s persecution. The fast approach of winter brings with it the anticipation of a quiet few months ahead. That is until the arrival of four mysterious, dragon-riding cretes who seek aid in a mission of great importance—not only to their own people, but to all followers of Elôm.

Hidden in the vast mining valley north of Valcré, a faithful crete has spent years sharing his knowledge with the destitute miners and their families and is known to possess what may be Arcacia’s last surviving copies of the King’s Scrolls—the Word of Elôm. Joining the cretes, those in Landale must find the crete teacher and bring him to safety, but it is a race against time. Should Daican’s men find him first, execution and the destruction of the Scrolls is certain.

When disaster strikes, all seems lost. Could Elôm have a plan even in the enemy’s triumph?

Howdy, Jaye, and welcome to Thoughts and Rants! (I guess the name didn’t scare you off :)). I am completely enthralled with The Ilyon Chronicles so I’m very excited to have you here today!

And thank you SO much for having me here for the tour! 🙂

You are quite welcome!

Is there anything in particular that you researched in order to help bring The Ilyon Chronicles to life?

There have been a variety of things that I’ve had to do, at least a little, research on for this series. In particular, for The King’s Scrolls, I had to figure out traveling distances for dragons. That had me looking up how far eagles can fly in one day. It was an interesting change from researching how far horses can travel. I have to say that with writing epic fantasy comes a need to research wounds and such. I did do quite a bit of research on broken ribs for TKS. Gladiators were another subject I did research on.

Ouch! Broken ribs! And the dragons are awesome!

What is one personal goal you would like to accomplish, as a writer or just in general?

Well, I’m really quite happy with how my writing goals are going, so besides that, I think my biggest personal goal is to get married someday. 😉 I have a real desire to be a wife if that’s what God has planned for me.

As a writer I know that a little bit of myself ends up in almost every character I write. What personal attributes do you share with one or all of your characters?

I probably share the most attributes with Jace and Kyrin. Jace especially. He’s like the male version of me in many ways. I think Jace’s difficulty with people comes from my own difficult situations and hurts I’ve had to go through. But then, Kyrin is also lot like me. We both get very claustrophobic in tight spaces and rely heavily on our brothers in social situations.

I was on the edge of my seat for the entirety of The King’s Scrolls. Are Kyrin, Kaden, and Jace in for more of the same adventures in the rest of The Ilyon Chronicles?

Oh, yes. 😉 Each book has its very intense moments. There is a LOT coming up, including plenty of surprises and changes. Everyone does a lot of growing by the end.

I won’t ask you to play favorites, but who is one character you would like to develop more?

Probably Glynn. He had a very minor role in The King’s Scrolls, but he intrigues me. 🙂 I want to develop and work him into the story more.

I love those kind of characters!

I’m about to embark on my own Christian fantasy series. Any advice?

Take time to breathe. Lol! Such an undertaking can get exhausting! But seriously, I think one of the best things to do as an author is always work on building your writer platform. It’s not always easy to make connections, but they are invaluable. It can get tough and feel like you’re not getting anywhere at times, but just keep at it. 🙂 I always tell myself, if God uses my books to touch the life of even just one person, then it’s all worth it. If He gave you the ability to write in the first place and you seek Him first in your writing, then you know He will help you use the gifts He gave you.

Thanks!! I tell myself a bit of the same thing! It’s encouraging to hear it from someone else!

Also, please take a moment to step back and see how awesome you are, Jaye! The Ilyon Chronicles are amazing books and I can’t thank you enough for the task you have undertaken to provide clean, Christian fantasy. It’s something sorely lacking in today’s world and I legitimately can’t wait until the rest of the series is sitting on my bookshelf!

Aww, thank you so much! Such words are a huge encouragement, and that is something we writers desperately need at times.

Jaye L. Knight is a homeschool graduated indie author with a passion for writing Christian fantasy and clean new adult fiction. Armed with an active imagination and love for adventure, Jaye weaves stories of truth, faith, and courage with the message that even in the deepest darkness, God’s love shines as a light to offer hope. She has been penning stories since the age of eight and resides in the Northwoods of Wisconsin.

Don’t miss the rest of the blog tour! There have been some awesome posts so far! Especially her interviews with the characters! The schedule is here!

Share in the excitement of the release and enter to win a themed Epic Winter giveaway! Prize pack includes an autographed copy of The King’s Scrolls, a CD by Future World Music (some of Jaye’s favorite writing music), a dragon bookmark, a stone hawk pendant (much like the ones mentioned in the book), and a few packages of Twining’s Winter Spice tea to sip while you read! (Giveaway is open to US residents only. Cannot be shipped internationally.)

(I love Future World Music! It is the perfect writing music!)

Haven’t begun the adventure into Ilyon? From February 17th – 23rd, get Resistance , the award-winning first book of Ilyon Chronicles for your Kindle on sale for only 99 cents! Check it out on Amazon!

To finish it off, here’s my review!

Where to begin?
This book is the sequel to Resistance (check it out now if you haven’t already). While I don’t know if it surpasses its prequel, The King’s Scrolls certainly comes close. It had me on the edge of my seat the entire time. Basically the main characters must find a religious teacher and the last remaining copy of the King’s Scrolls (Scripture) before the evil Emperor does. And this turns out to be as complicated as we might expect. There are gut wrenching twists and heart wrenching turns. Old characters are brought back and we are introduced to some wonderful new characters that I can’t wait to see more of. There are also dragons!!
Set against a backdrop reminiscent of the early Christian persecutions where believers of King Elom must be prepared to declare their faith in a time when such faith means certain death, Knight again quietly challenges readers to think about their own faith and how they might react in those very situations. Even in the bleakest moments the characters’ faith in God weaves threads of hope through the story. Amazing Christian fantasy! Highly recommended!

The author gave me an ARC in exchange for an honest review. I’m actually completely biased because I love this series so much and cannot wait to have the rest of the Ilyon Chronicles on my bookshelf.

And lastly, just because I really like this character…