To many of you, today is just Tuesday, April 21. But if you’re an Aggie you know that today is Aggie Muster.

Muster is one of my favorite traditions at Texas A&M. It began in 1883 when Aggies gathered together to “live over again their college days, the victories and defeats won and lost upon the drill field and in the classroom”. Eventually the day was moved to April 21 and the tradition of Muster was born.

“If there is an A&M man in one-hundred miles of you, you are expected to get together, eat a little, and live over the days you spent at the A&M College of Texas.”

Muster is held every year on the Texas A&M campus and in over four hundred places worldwide! I spent three years of my undergraduate career at Texas A&M and went to Muster every year. The most moving part of the ceremony (and my favorite) is the Roll Call for the absent. It remembers some of the Aggies who have passed away since the last Aggie Muster. The lights are dimmed and the families are given candles. One by one, names are called and the family members (or any members of the same class year) with reply “Here” as the candle is lit. 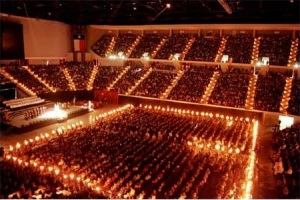 Once all the names have been called, Taps played and a 21 gun salute fired, one last poem is read, and all disperse in silence.

It is an incredibly moving experience and I tear up every year. You can go once and it will leave a lasting impression. I based a scene in The Wildcat of Braeton off of Muster and I’ve been told that it’s one of the most moving scenes in the book. The other is one based loosely off another Aggie tradition of Silver Taps.

There will be a Muster held in my hometown tonight, but I won’t be able to go because of test schedules this week. But even if you’re not an Aggie, take some time and remember fallen comrades and the times you spent with them. I’ll leave you with the last verse of the concluding poem.

Softly call the muster,
Let comrade answer, “Here!”
Their spirits hover ‘round us:
As if to bring us cheer!
Mark them “present” in our hearts,
We’ll meet some other day.
There is no Death, but Life Eterne
For heroes such as they!

For more info on Muster and other Aggie traditions, check out the links I used to help write this post!

6 thoughts on “Softly Call the Muster”