Want to know something exciting? 🙂

Yup, that’s right! Minutes before writing this post, I passed my goal of 10,000 words! That might not seem like much, but between working and editing my novella, I didn’t think I was going to make it at all. I’m excited that I’ve won my first Camp! I’ve never set word count goals for myself before and didn’t know how I’d like it. Turns out it was kind of fun to watch it climb and the associated stats pages. And now I have half of a really really rough draft! Since I’m used to taking my time when I write and getting everything in its place within the first few tries, this is almost painful to read over. But, now I can take my time through the rest of the story and then get to editing. So, who wants to take a look at The Sleeper in the Standing Stones? (I also think it will get a new name. I’m not sold on this title yet.)

When Princess Alainn rejects the suit of a sea captain, Dagur Arrison threatens to brings a curse upon her. She and her people ride to war against him, little realizing how real his threat is. Once Dagur obtains a rare stone, he envokes an ancient curse, using a simple needle to transfer it to Alainn. One prick is all it takes. Human by day, dragon by night, Alainn now becomes a weapon under his control.

The wizard Finbar enlists the help of the elusive Fae to reverse the spell. In the Highlands there is a ring of standing stones, with magic strong enough to counter the curse. Finbar and the Fae spin a spell that sends Alainn into a deep sleep to protect both her and her people. As the war continues, there is little hope for the sleeping princess, but Prince Ianto is determined to break the spell. One way or another, he will free the woman he loves.

A retelling of Sleeping Beauty for the Rooglewood Press Contest.

Note – Alainn is 17 when the story begins. The curse will come into effect around her 18 birthday. I was going to have her around 15-16 when the story started, but she seemed really young to be rejecting a marriage offer and it was just creepy in my mind.

She couldn’t wait for the dancing, not only because of a certain dark haired prince of Caernion, but also to watch her burly father spin her mother gracefully around the floor. She inherited her dark auburn hair and zealous laugh from her father, but her mother had passed her a fair share of wit and beauty. And from both, a double dose of stubbornness.

“And what say you, Princess?” he turned instead to Álainn.

“I would rather die,” she boldly stated. “Now leave this place!”

He bowed but his face had become as hard as stone.

“Then the curse of Dagur Arisson is upon you. You will soon regret this day and beg for me to take you!” a howl of wind filled the hall and Dagur and his men were gone.

She cried out as her sword arm was painfully wrenched behind her back and almost fell to her knees.

Dagur ripped her leather glove from her left hand.

“I could take you right now, but first you’ll taste my revenge.” He lifted a slender needle from a piece of sheep’s skin and set its point against her fingertip. A drop of blood beaded the wound and a burning sensation swept through her as she was filled with an inexplicable anger and rage.

“What did you do?” she snarled.

“You can end this before the sun rises and the spell becomes permanent,” Finbar warned.

“You can’t kill me and you know it. If I’m dead there’s no one to reverse the curse.”

“Call her off or I’ll take my chances.” Seven hundred and eighty-eight years had taught Finbar how to make threats. He felt the sea captain shake slightly under his grip.

“Fine. But tell King Bruce I want to talk to him tomorrow at noon,” Dagur snarled.

A circle of white light floated towards him. Inside the light hovered a figure, small enough to fit in the palm of his hand. She smiled at Finbar and he felt the urge to smile and weep all at once. But that was the way of the Fae.

He inclined his head respectfully and she laughed.

“The habits of young boys remain, I see,” she said.

“Not so young anymore,” Finbar replied.

In the gathering twilight, six more lights appeared around Finbar. One landed one the rock closest to him and he saw a man crouching within the light, clothed in white with a spear resting in his hand.

“Cairbre,” Finbar greeted him. The Fae smiled a greeting.

“It’s been a long time since we saw you so worried, Finbar. What brings you this far into the Highlands?” he asked.

Finbar gravely explained what had happened to Álainn and the Fae drew close.

And now a picture that I found that immediately brought Alainn to mind. This story has nothing to do with a ring, but the rest of it applies. 🙂 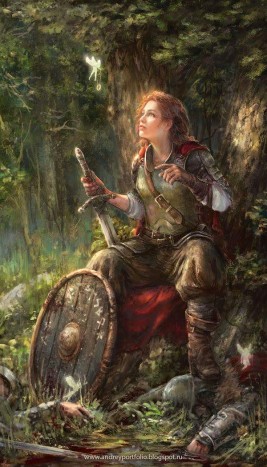