I meant to do this post last week, but with travelling for my brother’s wedding and a test on Tuesday, I didn’t get around to it. So here we go today!

The Con started on Friday evening with time for the VIPs to come check everything out.

All set up and ready to go!

My sister who is currently going to school in Lubbock came and helped me all weekend. When the two of us are together, crazy things tend to happen, including this when we got bored during some down time on Friday.

“We got bored at Comic Con so we merged bodies.”

Friday went pretty smoothly. We chatted to quite a few people, acknowledged many different fandoms, including one near and dear to our hearts. I speak, of course, of Supernatural.

Saturday rolled around with an early start of 9:30 am. I held down the fort until about noon when my sister rejoined me with a delicious lunch of fried chicken. She promptly became my hype man, reeling in the customers and going for the hard sell. Most of the time I didn’t have a chance to get a word in edgewise. Which was probably a good thing, because faced with hordes of strangers I’m not the most outgoing person. We made a pretty good team, chatting it up, selling books, and handing out bookmarks and candy to the Con goers. Cosplayers were a plenty and I got to snap a few pictures over the course of the weekend.

This dapper young fellow was one of many incarnations of the Doctor running around. But he was Ten so of course I had to take a picture.

Captain Jack Sparrow made an appearance on Sunday.

For those of you who like Minecraft, this was a pretty neat costume. He saluted me with arm across chest when he saw my camera out. 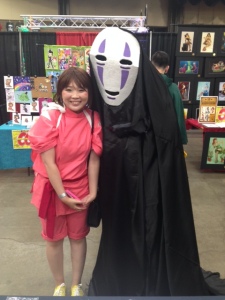 Spirited Away was a good movie so when I saw No Face wandering around… Also my older sister and I have this joke where we’ll go up to each other and go “uh…uh….uh”

My sister was channeling her inner Jayne, so when Captain Mal stopped by, a picture had to be taken.

There was an entire family cosplaying DC. They were just awesome so I had to stop them for a picture. (Black Canary is the best!!)

After Saturday ended at 8 pm, my sister and I went and grabbed some real food (and not the extra candy bars we had been snacking on all day), went back to her apartment and watched a movie called “Outlaw” on Netflix. It has Nicolas Cage and Hayden Christensen. Don’t worry if you’ve never heard of it. The acting is somewhat questionable but the fight scenes are really good. We both agreed that lightsaber training paid off for Mr. Anakin as his sword fights are cool. Anyway, if you’re bored one night and you need a laugh or two, give it a try.

Sunday! Another early start at 9:30 am and another long day. Sunday ran slower with the crowds thinning out, but my hype man gave it her best shot, and we did fairly well. I got a change to go around and met some other authors and exchanged contact information. We also did this.

Why yes this is the Impala from Supernatural. Well, one of them anyway. The young woman running the booth told us how she had bought the car and fixed it up as a fan project before taking it to a Supernatural Convention in Dallas. One of the producers apparently keeps an eye out for these types of things, got in contact with her, and asked if they could use the car in Season 9.

They were super nice and allowed us to take more pictures than we payed for. We came up with our own poses instead of the stock poses that they were offering. The camera guy kept taking pictures because he wanted us to have a good one, and they emailed us every single picture they took! It might have helped that we stopped by every day of the Con to chat for a few minutes before we finally came by for our photo op on Sunday. It was glorious. Although after cramming my 5’11” frame into that car I don’t know how those actors actually get in as they come in at least 3-4 in taller than me and my sister.

But yeah, we were both fangirling pretty hard inside. The trunk is packed with props that had been painstakingly collected over the years to make it look like the actual trunk. And I heard that she had actually built it back up around a little green army man. So definitely one of the highlights of the Con (since I’ve gone on about it for forever).

Overall, we didn’t do as well as the previous Con I attended back in March, but that’s ok. I met a lot of new people and gained quite a few new subscribers for the newsletter. I’ve already heard from a few people that they are really enjoying the books! The prints of the artwork inside were also a big hit and I think help really sell the books.

So besides the Supernatural Impala, my sister and I did one more awesome thing. On Saturday we were walking around the Con before it closed down and happened upon the costume and armor booth. And…we bought weapons! She bought a really cool knife and I got this! 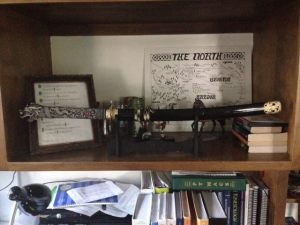 Yep! Real sword! Although blunted to allow it to be sold. (Ignore all the textbooks and stuff below :D)

Definitely a fun experience and I can’t wait for my next Con!!