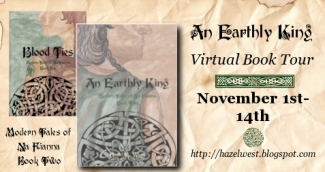 Earlier this year, I discovered an awesome new urban fantasy book thanks to blogger friend Deborah O’Carrol. It’s all about family, brothers, Ireland, fast cars, swords, and leather jackets. Don’t think. Just accept this crazy awesome mix and roll with it, because I absolutely adored Blood Ties by Hazel West. So when she was getting ready to publish book 2, An Earthly King, I volunteered my services as a beta reader and now as a blog tour host.

I’ve invited Hazel over for an interview, but first here’s a little about her new book! 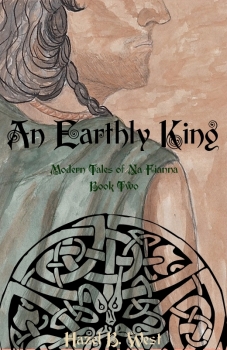 Six months after Ciran defeated King Lorcan and instigated a peace treaty between the High Court of Ireland and the Goblin realm, things have been slowly getting back to normal in the kingdoms. That is, until the council decides that it’s time for High King Eamon to find a queen.

On top of that, there seem to be stirrings of rebellion in the Faelands, as not all the Fair Folk like the High Court’s treaty with the Goblins. So it’s up to Ciran Mac Cool and his company to stop the rebellion before it goes too far, while also trying to keep Eamon safe from potential assassins. And with all the prospective brides rubbing elbows with the High King, that’s easier said than done.

With the help of their friends and a spunky agent from the Bureau of Protection Against Fair Folk, Ciran’s Company attempts to stop the Faery plots before Ireland is thrown into all out war. Again.

An Earthly King is another action packed book in this Celtic urban fantasy series with lots of friendship, humor, angst, and even traces of the Ballad of Tam Lin.

What initially inspired the Tales of Na Fianna series?

I think before I knew it was going to be set in Ireland, I had the idea of modern warrior characters who carried swords and drove fast cars. Then I realized no one had ever really done a modern retelling of the Fionn Mac Cool and Na Fianna legends, so I kind of combined the two ideas and turned it into a sort of urban fantasy, alternate history adventure novel.

I can safely assure you that it makes a great combination. 🙂 An Earthly King features old legends such as Tam Lin. What other Irish legends have you drawn from for this book and/or the series?

This one has a lot to do with Faerie lore in general. There’s a lot of homages to the old stories such as seeing potions, the risk of humans eating faery food, and the warding and protection you can use to keep bad faeries away. I also used several names from the old stories for several Fae characters such as Oberon and Eolande. Unlike with the goblins in Book One, I kept the Faery courts pretty traditional overall, though I did change things around a bit for a more modern setting.
Another thing that features in this book is All Hallows or Samhain (Halloween) which was one of the days that the ‘veils’ between the human world and the faery realm were kind of taken down, and the Wild Hunt would be out and about—which means you would not want to be!

I loved all the little details you pulled from the old stories. Who is your favorite character to write?

Any time I write a scene with Eamon and Killian I have a blast. They are so fun to write because they always make me laugh and are the kind of characters who just come up with their own dialogue—which a lot of times needs editing…
Besides them, I really enjoyed introducing Oberon in this book (you may see more of him in later installments.)

Ooh, yay! Ah, Eoman and Killian. I just about die laughing whenever they open their mouths. What is the strangest thing you had to research for this book?

Hm, that’s always a tough question as all of this is really kind of strange. I think one of the strangest things was the seeing potion Bree and Daegal use, which is actually a recipe from the 1600s that I found while looking for something else. I also tried to find out why exactly crossroads pop up so much in folklore and what makes them sort of ‘neutral zones’ between the worlds (aka, can help you see faeries) but found little to nothing on that unfortunately 😛

Boo. It is an interesting concept that’s been around for awhile. Can you described An Earthly King in three words?

Faeries. Women. Mangst (and yes, mangst is a word)

My favorite characters both to read and write, are the snarky, sarcastic ones who choose to emote that way than to simply sit around and brood all the time, even if they really just need a hug and a hot chocolate 😉

Brooders are overrated. There’s always need for more sass. What do you think the best genre is, and why?

Ooh, that’s a tough one. Especially since I typically love books because of the characters no matter the genre. I do tend to like supernatural/ fantasy a lot and after that historical novels. I really have gravitated to urban fantasy for the most part as it has all the best stuff about fantasy in it, but without the risk of getting bogged down in world building. High fantasy is good, (huge Tolkien fan!) but I can pick up and enjoy something like the Dresden Files any day, any time, whereas I’m not always in the mood to slog through a high fantasy novel.

I’d really love to read the Dresden Files one of these days! You get two books and a movie to keep you company for the next year. What do you choose?

Oh boy. Umm…for books I’m going to go with Jackaby by William Ritter and This Savage Song by Victoria Schwab which was one of my favorite reads this year, and I adore her books. For movies, how about either the LotR Trilogy or the Hobbit Trilogy? (and if not, the first of either of those 😉

I guess I’ll let you get away with the trilogies as one movie since I’m a huge Tolkien fan too… 🙂 Strictly a fan question – when is book 3?!

I’m hoping to get it out Summer of 2017! (And there will be an excerpt of it in the back of the paperback copy of An Earthly King if you buy it!)

If you would like to check out Blood Ties (book 1), it’s currently free right now over on Amazon (up until Nov 5, I believe)! *force waves* you should check these books out now! 😛

Check out the rest of the tour!

Hazel West lives in Purgatory, er, Florida, with her books and her hedgehog Horatio. When she’s not writing, she’s reading other people’s books, studying folklore, or binge-watching something on Netflix—drinking coffee is also a given.

Do you read Urban Fantasy? What interests you most about this series?