You’ve seen some of Faith Blum’s books pop up on this blog before and I’m really excited to help out with the three year anniversary birthday bash for Book 1 in The Hymns of the West! To celebrate, she has all sorts of fun going on. First, she’s released a newly revised version of A Mighty Fortress. Second, she has most of her published books on sale. Third, she’s releasing the box set of all five of her novels for a special discounted price. And fourth, but not least, she now has the audiobook of her AMF available! Read on for more party fun.

I have two reviews as part of the blog tour and up today is Be Thou My Vision! 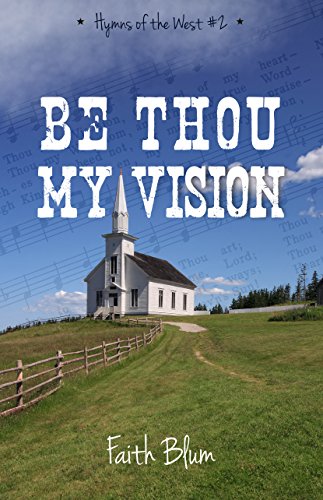 The church was empty when I dragged myself out of the pew and headed out the door.  As I opened the door, the corner of my eye caught a flicker of movement which I chose to ignore.  I walked down the steps and was nearly bowled over by two wild boys.  With arms grown strong and quick from man-handling two brothers growing up, I grabbed the two boys before they had a chance to escape me.

Anna Stuart is comfortable with her life.  She may be a 30 year old spinster, but she has her routine and enjoys taking care of her father and older brother.  One letter shatters all her routines, comfort, and enjoyment.  After learning of her brother’s death, Anna feels like her life will never be the same again.

Then she meets two motherless boys.  Did God place them in her life to lead her to a new vision of life?  Can she trust God to give her the desires of her heart before she even knows what they are?

This was my first novel in The Hymns of the West series, and I really enjoyed it!

It’s a lighthearted read focusing on a young woman struggling to find God after her brother’s death. I loved Anna and felt that her struggles and hopes were very realistically portrayed. I enjoyed seeing her grow in her faith and just as a character through the book. Miles was also great, and the two boys were so cute! They kept me smiling and even threatened to make me cry at one point.

The story is sweet and simple. Faith has a really engaging voice that kept me flipping pages. Even though I started with book 2 in the series, I don’t feel like I missed anything. I’ll definitely be checking the rest of the series out when I have the chance. The Christian element was well done. I never felt preached at, something I appreciate.

Recommended for anyone who likes historical fiction, Westerns, and stories of faith.

Faith Blum started writing at an early age. She started even before she could read! She even thought she could write better than Dr. Seuss. (The picture doesn’t show it well, but there are scribblings on the page of Green Eggs and Ham). Now that she has grown up a little more, she knows she will probably never reach the success of Dr. Seuss, but that doesn’t stop her from trying.
When she isn’t writing, Faith enjoys doing many right-brained activities such as reading, crafting, playing piano, and playing games with her family. One of her dreams is to visit Castle City, Montana, someday to see the ghost town she chose for her characters to live in. She currently lives on a hobby farm with her family in Wisconsin.
There are many ways to connect with Faith online. All of them can be found in one convenient place: http://FaithBlum.com. On her website you can find links to her various social media sites and both of her blogs.

Every eBook in the Hymns of the West series is on sale. A Mighty Fortress is permafree, and the other eBooks in the series are $0.99. In addition, the spin-off novella series has a book on sale as well.

Be Thou My Vision

Lily of the Valley

Hymns of the West: The Complete Series

Life and Salvation: Hymns of the West Novellas 1-3

Faith also has the paperbacks on sale if you buy them from Createspace with the discount codes.

Be Thou My Vision

Lily of the Valley

Do you like Westerns? Have you read any of the Hymns of the West?