Everyone has their secrets and Tayte, Agnes, and Noah are no exception. In Agnes’s home, though, those secrets—or dragons—might just tear them all apart. Part of the Kindle Scout competition, The Dragons of Alsace Farm, was hot and trending for four weeks before its launch. Find out why during this blog tour! 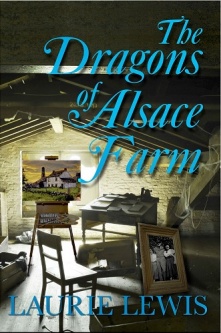 In need of his own redemption, Noah Carter finally confronts his childhood hero, the once-beloved uncle who betrayed him. Instead of vengeance, he offers forgiveness, also granting Uncle John a most curious request—for Noah to work on the ramshackle farm of Agnes Deveraux Keller, a French WWII survivor with dementia.

Despite all Agnes has lost, she still has much to teach Noah. But the pair’s unique friendship is threatened when Tayte, Agnes’s estranged granddaughter, arrives to claim a woman whose circumstances and abilities are far different from those of the grandmother she once knew.

Items hidden in Agnes’s attic raise painful questions about Tayte’s dead parents, steeling Tayte’s determination to save Agnes, even if it requires her to betray the very woman she came to save, and the secret her proud grandmother has guarded for seventy years.

The issue strains the fragile trust between Tayte and Noah, who now realizes Tayte is fighting her own secrets, her own dragons. Weighed down by past guilt and failures, he feels ill-equipped to help either woman, until he remembers Agnes’s lessons about courage and love. In order to save Agnes, the student must now become the teacher, helping Tayte heal—for Agnes’s sake, and for his.

L.C. Lewis (Laurie) was born and raised in rural Maryland, surrounded by history-rich Philadelphia, Washington, and Baltimore. She and her husband Tom reside in Carroll County, Maryland, where they raised their four children.

The Dragons of Alsace Farm, Laurie’s eighth published novel, was inspired by a loved one’s struggle with the dragon of dementia. Her women’s fiction novels include Unspoken (2004) and Awakening Avery (2010), written as Laurie Lewis. Using the pen name L.C. Lewis, she wrote the five volumes of her award-winning FREE MEN and DREAMERS historical fiction series, set against the backdrop of the War of 1812, America’s nearly forgotten second war of independence: Dark Sky at Dawn (2007), Twilight’s Last Gleaming (2008), Dawn’s Early Light (2009), Oh, Say Can You See? (2010), and In God is Our Trust, (2011).

Dark Sky at Dawn and Twilight’s Last Gleaming were finalists in the 2008 USA Best Books competition. Oh, Say Can You See? was a 2010 Whitney Award finalist.

Three new books are in progress. Please watch for her remake of Awakening Avery, a political suspense novel titled The Shell Game, both of which are slated for later in 2016, and a March 2017 novella, Laurie’s contribution to the multi-author “Destination Billionaire Romance” series.

Laurie loves hearing from her readers and may be contacted through her website: www.laurielclewis.com. You can also follow her on Twitter @laurielclewis or on her blog at www.laurielclewis.blogspot.com. She also enjoys interacting with book clubs. Contact her to arrange a video chat with your group.

The back of the book contains some thought-provoking book club questions. Laurie would love for you to schedule a video conference with her if their book club chooses The Dragons of Alsace Farm as one of their selections in the next six months. You can email her at: laurielclewis@laurielclewis.com.

First and foremost, The Dragons of Alsace Farm is a love story, about the power of tested love, the promise of new love, and the strength of family love. Here’s a love basket, with a fun date night, Agnes’s favorite breakfast for the morning, and an autographed copy of the book to read on a lazy afternoon. Always remember love.

Enter here for the chance to win a paperback of The Dragons of Alsace Farm.

Hi, Laurie and welcome to the blog!

Hi, Claire. Thanks so much for the interview and the opportunity to talk about my new book, “The Dragons of Alsace Farm.”

You’re very welcome! What inspired The Dragons of Alsace Farm?

My beautiful, gentle mother inspired the story. I had planned to write a book that spanned from WWII to the present, with the same basic storyline of “Dragons,” using Mom’s beloved, ramshackle farm as the setting. And then, Mom was diagnosed with dementia, and things that hadn’t made sense finally did. I made the choice to tackle the challenges of dementia in the book, so instead of simply making Agnes a WWII survivor, I ramped up the tension by placing Agnes on the dementia spectrum.

And then a really lovely thing happened. Soon after Mom’s diagnosis. a young couple with mild disabilities moved into her home for a few months. Mom believed she was helping them, and they felt they were helping her. I was fascinated by the way these three disabled people strengthened one another and themselves through serving each other, and I wanted to introduce that element into the book somehow as well.

I spoke with two friends who are also family therapists, and they suggested I use abuse or drug addiction as the challenges or “dragons” my young characters would face. I remembered a sequel I had written years ago to my first novel, “Unspoken.” I never published it, but I loved the personal dynamic of the emotionally broken characters, so when I began drafting “Dragons,” I placed them in the story, and had them fill that helping role with Agnes.

It sounds like I quilted the book together, and I guess, in some ways, I did.

That’s amazing that you decided to tackle that many different issues within one book! What was the most difficult part of writing this book?

Making sure I got the depictions of all these complicated characters just right. Each of them faces something incredibly challenging, and I wanted to handle those issues plausibly while also making “Dragons” a hopeful redemptive story about the power of love, so I relied on my friends/therapists and beta readers to get it right, and I think we did.

Was there anything completely random that you researched for this book?

I’m laughing my head off. I spent several hours researching goat births. My mother talked about each birth on the farm, so I had some idea, but the difficult birth in the story was key to Noah’s character development, and I wanted to get it right, so I read, articles and watched some up close and personal farm videos for hours.

That is hilarious! 🙂 Is there one genre you’ve always wanted to try to write in (besides contemporary fiction)?

Perfect question! I’m giving romance a shot! The owner of Gelato Books approached me about writing a volume in The Destination Billionaires Series. My volume debuts in March of 2017 under a new pen name—Addison Tayte—so I don’t confuse the faithful readers of my general and historical fiction novels.

Hands down, Nicholas Sparks’ Message in a Bottle. That book depressed me so badly that I literally threw it across the room. A reader can only take so much suffering, NS.

Hehe! I’m not a fan of Nicholas Sparks, but I do know some people who dislike some of the endings he comes up with. 😛 You get two books and a movie to keep you company for the next year. What do you choose?

The best book to fill that requirement is also the book that contains every theme found in any other book—the scriptures, (four-in-one combo). Gotta have those. And a classic I won’t mind reading and rereading. I’ll take Great Expectations.

Since I only get one movie, I need my fav. A Walk in the Clouds with Keanu Reeves. I‘ve probably watched that movie thirty times. It’s clever and tender with a touch of humor. Best movie ever!!!!

I’ll have to check that movie out. What can we expect to see from you in the future?

I hope to have three more books out in twelve months. I’m hope to have a political suspense novel out by Christmas. It’s currently titles, The Shell Game, but that could change. I love the two protagonists, and it’s stuffed with action and mystery from the first page.

My DBR romance launches in March, and I’m rewriting a novel I wrote for the LDS market (Awakening Avery) to make it more general.

I also have an outline for a new historical romance, a new volume for my Free Men and Dreamers series that carries the next generation west, and I woke up from a dream the other night and ran to my computer. After a half-hour I had a love-triangle romance outlined and ready to go, so I have lots of ideas. I just need more daylight!

Oh, I feel you there with the “needing more daylight” thing. *quietly makes a note of the suspense novel’s name* Well, that’s all the questions I have, so thanks for coming over, Laurie, and best of luck with The Dragons of Alsace Farm and all your upcoming novels!

Thanks so much for the interview, Claire. I so appreciate the chance to introduce more readers to The Dragons of Alsace Farm. I hope readers will visit my web site and sign up for my newsletter at http://tinyurl.com/gox2uya. I offer at least one free book to my followers each month.

Have a great day, and always remember love!

July 31
Bookish Orchestrations-Tour Introduction
Laurie L.C. Lewis: A View From the Other Side of the Hill-Excerpt
Writing in the Light-Excerpt
Charity’s Writing Journey-Excerpt