Welcome to day 3 of the blog tour! Make sure you check out this review and spotlight from the fabulous Breny over at Better than Rubies!

To celebrate Oath of the Outcast officially being 1 day old, here’s a post breaking down the main characters in the book, along with quotes!! I’ve been asked which character is my favorite. It’s so hard to choose!! They were all so easy to write, and pretty much charged in along with Rhys/The Baron fully formed and ready to go. But if the Cairns held me at knife point and asked, I’d obviously, and truthfully, say Rhys/The Baron.

He is, after all, my smol floof of anger management issues.

Banished from Clan MacDuffy 7 years before the story begins, Rhys/The Baron has been living in the Cardic Mountains 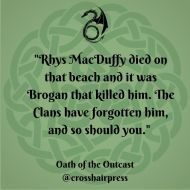 as Baron of the Dragon Keep. He established his own rule and has the sworn loyalty of the Cairns (see below). Cross him at your own risk. But will do anything for younger brothers even if he maintains that he doesn’t have a brother since being exiled from Clan MacDuffy. You can find some very important things to know about him HERE.

Younger brother to the snarky angry mess known as Rhys/The Mountain Baron. He is the Seer for Clan MacDuffy and is rumored to be the strongest Seer in over a hundred years. He’s also the catalyst for this entire story, and is a little salty about the fact that he had to go be kidnapped by the warmongering Lord Adam who hangs out with some creepy Druids that are after Sean’s Seer power. ⁣
⁣
As the younger brother of Rhys/the Baron, he also comes by the sass honestly. But he is just a sweet cinnamon roll who just wants his brother to be able to come back home. 😭⁣

Childhood best friend of The Baron, who volunteers to go with him to go rescue Sean. Typically easygoing, but can tap into the battle wrath when fighting. He is the nephew of the current Laird MacDuffy and will literally do anything to avoid being appointed his heir. Will also troll Rhys/The Baron any chance he gets.

Cult like group that follows the worship of the demon Deronis. They have aligned themselves with Lord Adam Barkley in a mutual quest for power, and seek to obtain the Seer’s/Sean MacDuffy’s power for themselves. Very creepy and malicious. Annoy a majority of characters with their fanaticism and overly long beards.

The lord who ordered the kidnapping of Sean MacDuffy and is beginning to dislike the deal he struck with the Druids since he has to put up with them on a daily basis. He’s out for power and is happily instigating civil war among the various groups in Alsaya. Has a past with The Baron/Rhys and snarks at Rhys/The Baron from behind the comfort of guards.

The Baron’s men – comprised of outlaws and criminals of various flavors. They have all sworn loyalty to the Baron and maintain his rule in the Cardic Mountains. Whoever thinks about crossing them or the Baron usually doesn’t get very far. Life motto is basically “will stab anyone for the Baron.” They are known as the Cairns because they will “either guide your way, or mark your grave.”

Check out the book!

To celebrate, I’m teaming up with Crosshair Press to give away things!! Up for prizes are 2 ebooks, 1 paperback, and a combo package of bookmarks and a map postcard!

12 thoughts on “Oath of the Outcast Blog Tour – Meet the Characters!”