Today I’m hosting Ms. Jaye L. Knight and Book 3 of the Ilyon Chronicles! I’m a big fan of this series and have been looking forward to this book for basically forever. Ok, since last year when Book 2 came out. I get to share an excerpt today but before we get there, as always, read to the end for the giveaway! And find the rest of the schedule HERE.

And now, a little about the book! 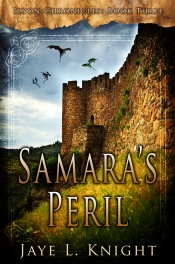 When news arrives that Emperor Daican has been in contact with his chief war strategist, it signals potential doom for the country of Samara. Determined to intervene, the resistance in Landale, headed by Lady Anne, embark on a covert mission in hopes of unearthing further information. However, a shocking discovery leads to complications no one could have foreseen.

Armed with their newfound knowledge, they set out for Samara to warn the king. War is inevitable, and they must face two desperate battles—one on the walls of Samara’s great stronghold, and the other on the battlefield of Jace’s heart, where victory might only be achievable through great sacrifice.

Haven’t discovered the world of Ilyon yet? Find out more at the official Ilyon Chronicles website!

Spring was Trask’s favorite time in Landale. It always brought him back to his childhood when he and his friends had run off to the woods to build their forts and have grand adventures. They had spent all day in the forest, always reluctant to return home in the evening. He’d often wished he could live in one of their forts and never leave. He chuckled, taking in the view of camp from just outside his cabin. Though he couldn’t say he liked the circumstances, that wish had come true.

Across camp, his eyes snagged on movement that brought a wide smile to his face. There was one thing that could make a day like this even better, and she was riding in right now on a white mare. He set off to meet Anne, his heart light in spite of the matters weighing on his mind. Her smile further buoyed him up. He had known her since they were toddlers, yet she still captivated him like no other. One of these days, he would make her his wife.

“Two visits in one week. Aren’t I lucky?” He took hold of her horse’s reins while she dismounted.

Anne gave him her familiar amused smile. “I came to see if Jace was back and how Kyrin is doing.”

Trask tipped his head. “Why is it that you never seem to come just to see me?”

“You’re the one who cautioned me about being seen too often on the forest road. I have to pick and choose my times.”

Trask glanced at the playful curve of her lips, tempting him to kiss them.

Trask and Anne are adorable, that’s all I have to say. 🙂

Jaye L. Knight is an award-winning author, homeschool graduate, and shameless tea addict with a passion for Christian fantasy. Armed with an active imagination and love for adventure, Jaye weaves stories of truth, faith, and courage with the message that even in the deepest darkness, God’s love shines as a light to offer hope. She has been penning stories since the age of eight and resides in the Northwoods of Wisconsin. 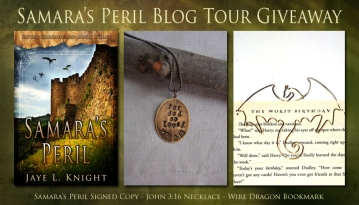 Share in the excitement of the release and enter to win a themed giveaway pack! Prizes include an autographed copy of Samara’s Peril, a John 3:16 necklace by FaithWearDesigns, and a green wire dragon bookmark by Wirelings! (Giveaway is open to US residents only. Cannot be shipped internationally.)

Have you read the Ilyon Chronicles? If you have (or haven’t) let’s talk in the comments! 🙂