A few weeks ago, I linked up with Shantelle Hannu’s awesome Hidden Gems blog series. Obviously I’m doing the same today and it’s an author I’m super excited about. Why? Well, I devoured Regina Doman’s books as a kid in junior high and highschool. Not only are they amazing fairy tale re-tellings, they’re also Catholic which is awesome because modern Catholic fiction is a bit rare (or maybe I’m just not looking in the right places.) Anyway, these books are awesome, so I’ll be giving really short reviews on the series today. If you want to find out more about each book, click on the cover to go to the Amazon page.

Also, make sure you check out Shantelle’s post for an interview with the author and also because Mrs. Doman is hosting a giveaway to the person who asks her the most interesting question in the comments on that post.

It’s also been a while since I’ve read these, so I’ll do my best to hit the high points and keep the book love to a minimum.

A retelling of Snow White and Rose Red, this story sucks you in right away when a young homeless man helps Rose and Blanche’s mother on a blustery winter night in New York. He goes by the name Bear and strikes up a friendship with the girls and mystery and excitement follow.

I love Bear (and his brother Fish). They have a great backstory and Bear’s relationship with the girls is the best. I’m not sure which sister I like better – the eager and outgoing Rose or the more reserved and cautious Blanche. They’re so different from one another but they’re always there for one another.

The plot moves right along, mixing normal highschool drama in with the mystery of Bear and the abandoned church next to the school. I still love going back to re-read this story (and the whole series really.) This book is also the reason I started reading some Chesterton. 🙂 Highly Recommended!

Black as Night picks up not too long after book 1. Blanche and Rose are now good friends with Bear and Fish. It’s a retelling of Snow White, so you can probably guess what might happen. Blanche disappears while her family is on vacation and the boys are off in Europe. You don’t really find out what she’s on the run from until later in the book which gets frustrating at times. She takes refuge in a church inhabited by seven Franciscan Friars (who are all hilarious).

The amazing characters are all back. Plus the bonus of seeing more of Fish and Rose together. Seriously these people still have my votes for best couple awards. 🙂 The plot moves a bit slower in this one, but Mrs. Doman knows how to keep you glued to the page. I love love the ending! Obviously recommended. I’m never not going to recommend this series.

The most important thing you need to know about this book is that it’s all about Rose and Fish. Seriously, these two!! Rose heads off to a small Catholic university and we get introduced to a whole host of new characters – namely a groups of wannabe ninjas/knights from the boys’ dorms. These guys are the best and I’m still hoping a Sacra Cor guy will wander into my life. 😛

When Rose starts to dig into some old notes of her dad’s, things get interesting. It’s a Sleeping Beauty re-telling, so I don’t really think it’s a spoiler if I tell you she ends up in a coma. So it’s up to Fish and her new friends to figure out what happened. Fish is also dealing with some baggage at the same time which makes me want to give him a hug even more. The last quarter of this book is really intense, so plan reading accordingly. 😉 This book might be my favorite of the series. Our copy is also falling apart, so clearly it’s seen some readerly love over the years.

Know how I was talking about those ninja/knight wannabes? Well, the next two books in the series focus on two of the guys. Here we have Paul, a med student on his way back home from a military tour where he served as a medic. He ends up saving an officer’s life and because of that gets introduced to the officer’s twelve daughters. I think you might know which fairy-tale this is. 🙂 Rachel is the oldest daughter and chafes under her dad’s strict fundamentalist views. Her family is Protestant and Paul is a Catholic, so it was really interesting to see the different aspects combine in this story.

Paul is awesome. He might even edge out Fish and Bear (but barely). He follows the girls on their rebellious night time boat rides to a nearby island and takes it upon himself to try and protect them from the owner. I could go on about how great Paul is, but you should just read the book. And again, be prepared to be glued to the couch from just about page 1. 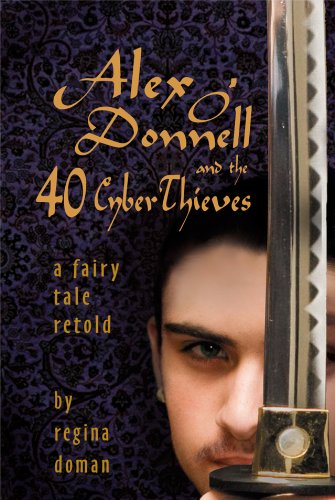 This wasn’t my favorite, but it’s still a good story. It’s a retelling of Ali Baba and the Forty Thieves (which you don’t see that often) but with computers. Here we have Alex, one of the Sacra Cor guys who also happens to be dating one of Rose’s friends from the college they all went to. Alex is pretty laid back and Kateri is more driven, which makes their relationship interesting to watch. He convinces her to come and visit and then stay on and work with his family as they open a small hotel. Little do they know that his dad accidentally mixed with some less than savory people on the internet, leading to new wealth and accompanying trouble.

Alex is a gamer and martial artist and not really concerned with the future which drives Kateri completely nuts as they’re supposed to be figuring out their relationship. Needless to say, I think they’re both good for each other. The plot is great and fast paced, I think it was just all the techo stuff that kind of turned me off. But I still enjoyed it!

Aand we’re done. She also has another fairy tale book that I haven’t read yet. But long story short, if you couldn’t tell, I still love these books and everyone should read them. 🙂 Don’t forget to swing by Shantelle’s  blog to leave a comment to win an ebook of your choice from Regina Doman.

Have you read these books? What’s your favorite fairy tale?