It’s #BlogBattle day! You can find all the rules and regulations for this competition hosted by Rachael Ritchey here. Make sure to check out the other submissions and vote on your favorites.

The genre: Contemporary with a Western theme. 🙂 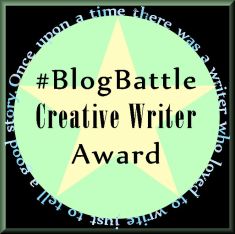 Shane Donovan, the most famoustest cowboy in all the land, watched a tumbleweed skitter across the dusty ground. Somewhere out there among the rocks and scrawny trees, the notorious Running Bear hid. Shane fingered the stock of one of his prized revolvers strapped to his waist. The wind tugged at the brim of his hat, stained brown with mud and sweat.

He’d chased the Indian across half of the West, finally cornering him in some corner of Texas. Running Bear was finally done killing. Not even his half-tame coyote would save him this time. Shane stepped out from behind the boulder and began to creep forward. The toe of his boot dislodged a good sized rock, sending it tumbling down in the company of several friends. The crack of a rifle sent him diving for cover.

The landscape lapsed back into silence as the two adversaries calculated their next move. Shane counted his bullets. A recent encounter in a canyon had drained him of all but two. He settled his hat more firmly on his head and got to his knees. The tip of a feather protruding from behind a tree betrayed Running Bear’s position.

At the same instant, they both deserted their hiding places and charged – Shane with guns raised and Running Bear brandishing a fearsome tomahawk and loosing a bloodcurdling scream.

The slam of a screen door interrupted the cacophony of their battle.

“Moom!” they both shouted.

Mom picked up a discarded t-shirt from the porch and held it up. “Derek, is this yours?”

“You’re filthy. Go wash off with the hose before you come in.”

“But Mom, this is our final battle! I have to kill him. He scalped my entire family,” Shane protested. Derek raised his foam tomahawk with a ferocious growl.

“Come smoke the peace pipe over grilled cheese sandwiches,” Mom suggested. Shane holstered his orange capped revolvers and ran for the hose. Derek knelt by the patient Lab that panted in the shade of the tree that had been Running Bear’s hideout, and pulled the dove feathers out from under its collar.

“Hurry!” Shane called, sneaking a drink from the water hose. The rinse-off almost devolved into a full-fledged water fight until the reminder that their sandwiches were getting cold sent them sprinting inside.

“What do you want to play after this?” Derek asked, his missing teeth cutting irregular shapes in his sandwich.

“You want me to finish killing you?” Shane asked, gulping some lemonade.

“Sure. And then we can do Lone Ranger and Tonto.”

“I get to be Tonto this time.”

They grabbed cookies and darted back outside where the wails of battle sent the coyote into the fray in an attempt to save his master Running Bear.

22 thoughts on “Cowboys and Indians – #BlogBattle”