Before we get started today, make sure to check out the amazing blogs of today’s hosts for the blog tour!

Alyssa is giving a review today.

In an interview with Emily, she gets me to admit that I’m not a faery. 😉

Rachael Ritchey is hosting a spotlight on Adela herself!

Alea invited me over to guest post and I look at reasons to write fantasy.

Ok! Today, I thought I’d talk a little bit about what inspired Adela’s Curse and some things that influenced the story itself.

I’ve talk about the actual inspiration in some upcoming interviews, but basically I woke up one morning and the image of a faery in a forest glade popped into my head. Was it Adela? No, actually. If you read the spotlight on Damian yesterday, you’ll find out it was him! So when I sat down to brainstorm and figure out who this faery was and what had brought him to the clearing, I eventually discovered Adela and her story.

Has this happened to any of you writers out there?

Next, here’s a few of the things that influenced Adela’s Curse! 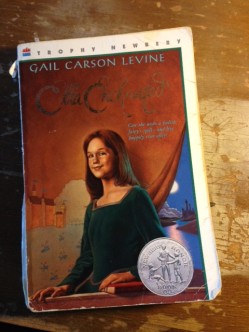 Here’s my very battered copy of Ella Enchanted which I love dearly.

I still love this story, so it’s no wonder I have to credit it when writing a story about a girl who gets put under a spell and has to do everything that she is ordered. Don’t worry, Adela get’s a happy ending. Or does she? *evil laugh*

I LOVE THIS MOVIE!

So, there’s a part in Adela’s Curse where I thought I was being so original and creative and then like three days later I realized “omg, that’s from Tangled”. But I think that’s pretty much the writer’s life, right?

This one kind of inspired two minor characters. They bicker back and forth but really secretly like each other. I had just written a scene between the two of them and realized they are really similar to Beatrice and Benedick. Which isn’t a bad thing, since Much Ado is hilarious and I happen to really like my characters. 🙂

I’m sure there’s more things that influenced my subconscious while writing, but these are the biggies.

Discover more of the magical world of Myrnius!

5 new newsletter subscribers by Wednesday, March 9, to get a sneak peak of Book 2!

There will be 3 winners! Up for prizes are 2 copies of Adela’s Curse and 1 paperback copy of The Rise of Aredor which is celebrating its 2nd birthday on March 11!

Leave a Reply to Claire B. Cancel reply